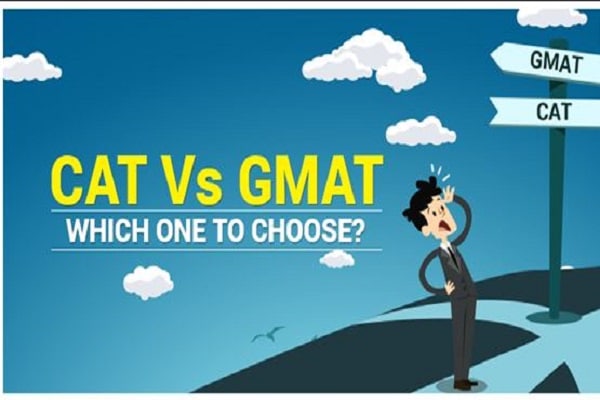 Several B schools in India accept GMAT scores besides CAT for pursuing Business Programs. (GMAT is accepted not only by IIMs but also top colleges like ISB, S.P Jain, Indian Institute of Foreign Trade, XIM, XLRI, Birla Institute of Management Studies (BIMS), Faculty of Management Studies (FMS), Great Lakes Institute of Management, IMT and many more.) Watching closely the number of Indian B-schools accepting GMAT is increasing year on year and are also coming up with new reforms in admission criteria and programs to cater to a wider range of management aspirants. If you observe the stats carefully you understand that number of test takers for GMAT is increasing noticeably besides the changing trend of fresh graduates taking GMAT, unlike always test-takers being candidates with work experience. Certainly, it’s a welcoming change giving the Indian students an opportunity to look beyond the CAT test to fulfill their dreams of studying a Management program from premier schools.

The ratio of MBA Seats to MBA aspirants:

In India, the ratio of the number of applicants to the number of seats in the top MBA colleges is very low. Approximately 2,45,000 students appear every year for the CAT exam to compete for 3,265 seats offered by all twenty IIM’s. There is approximately 1 seat available for every 74 odd students in the IIM’s. Hopefully, this answers how difficult it is for one to get entry into IIM’s.

The number of GMAT test-takers in India is just about one-eighth the number of CAT test-takers, but the number of top colleges to apply across the Globe is significantly more than those available in India. Therefore, the seat per student ratio is more favorable for students who are open to studying abroad.

The CAT exam is held once a year in the month of November/December. You do not have the option of choosing the date and location of your exam

It is you who would decide when to go for the GMAT exam. You can take the GMAT up to 5 times in a year, and the dates can be selected by you. The GMAT test even has the option of rescheduling the test date, unlike CAT.

Finally, GMAT gives the room for setting your preparation at your own pacing. Also, you have the option to retake the exam in the same year and not have to wait for a year time, unlike CAT. This saves you a lot of time and effort since you won’t have to start preparing all over again. In addition to this, you see that schools abroad facilitating applicants by offering two intakes in an academic year’s time (Fall intake and the other Spring intake), which you don’t get to see in Indian B-schools.

The validity of Scores:

This is an obvious advantage that the GMAT has over the CAT exam, as all of your hard work is not wasted in case you don’t get into the business school of your choice in that year

Predictability of the TESTS:

The exam pattern of CAT is unpredictable. It changes almost every year to make it a more dynamic test. Though, the CAT exam pattern has remained the same over the past five years. it’s expected that the CAT 2020 exam pattern won’t remain similar.

The GMAT exam pattern is the same and there is no surprise element on the test. It has undergone a change in the year 2012 and since then pattern remained the same and generally before GMAC brings in any change on the GMAT test, test takers are well informed in advance.

So, this implies that GMAT is relatively easy to work with compared to CAT. As the saying goes “Known Devil is better than unknown” likewise “GMAT is better than CAT”

The GMAT test is much more standardized than CAT. If you have prepared well for GMAT, there are no surprises. e.g. Verbal section will have RC, CR, and SC. CAT also has a syllabus outline, however, it is quite broad. Coming to the Math section on GMAT, you get to see school day math fundamentals tested but not the advanced concepts whereas CAT tests the mix of both Basic and Advanced concepts, and truly the degree of difficulty is much higher compared to GMAT. 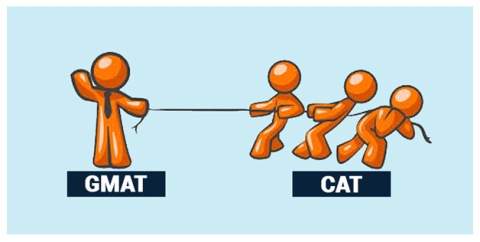 Work Experience and its impact:

CAT:-  Work experience is recommended but not mandatory for selection. IIMs do give importance to work-ex and an applicant with more than a year and a half work experience always gets preference over a fresher with the same percentile.

The percentage of students with work-ex in premier institutes like IIM, XLRI, FMS, SP Jain varies from 12-36 months and The average number of years of full-time work experience varies from 0-24 months. Though all these statistics are increasing year after year, Off late it has been observed that many engineering graduates join B- school after working in a top-notch IT company, and this sets them a good platform to earn much higher salaries than the one who is just a fresh graduate.

GMAT:- Work experience is certainly required for the full-time MBA program and in general, requires at least 2 years of work experience to apply to schools abroad. To put it straight, you can take a GMAT test when you are a fresher or while pursuing graduation final and later apply to schools down the line after gaining 2-3years of work experience. This brings one exposure to Industry, work culture, functionality, market dynamics, and various other factors that help them incorporate practical knowledge while doing their MBA case studies. Schools won’t consider admissions without work experience unless the school sees some visibly trenchant value in you to want to grab you in-spite of the lack of work experience. However, the MIM programs, which have more of a theoretical focus is gaining bigger importance globally and would have no problem looking at your case if you have no work experience.

The following link gives you bigger insights into the difference between MIM & MBA programs: https://www.mba.com/explore-programs/program-types/the-differences-between-masters-in-management-and-mbas

Excelling on CAT is simply the primary step in what’s a laborious and highly competitive admission process. Group discussions, Essays, and personal interviews are subsequent in line before you bag the coveted admit. And deteriorating your already knotty task is the proven fact that Each step includes a high and arbitrary “cut-off”. you may need to meet the intimidating sectional cut-offs, 10th marks, 12th marks, Graduation marks ……before you finally convert it.

Top of it the competition is incredibly high. For about roughly 1000 seats within the top five IIMs, you’re competing with almost 240,000 people with similar aspirations. And don’t forget the ever-present reservations in India! Only 0.4% of the overall number of applicants make it to the IIMs.

GMAT:  Besides sending the GMAT score, you would need to send your essays and recommendation letters, during which there’s plenty of scopes to elucidate certain “gaps” in education and skill which isn’t possible while applying to IIM schools. The schools abroad don’t bother to look at your 10th or 12th standard marks! it’s all about how you’re as an individual – and not just meeting some arbitrary “cut-offs” which in all probability you don’t even know.

The conversion ratio is sort of 25 percent for B-schools who consider GMAT.

More importantly, you get to see that candidate even after holding a good profile & competence in becoming a future leader couldn’t get through IIM’s only because he/she didn’t have qualifying test-taking skills to surpass the CAT test effectively.

Unlike CAT, GMAT doesn’t close doors to qualify you to get into a school of your choice simply because of not scoring well on the test. There are umpteen numbers of cases where B-Schools had relaxed the GMAT score and gave importance to student profile in considering admissions.

Studying abroad gives you a chance to create a student network of various diverse backgrounds with different cultural values, traditions, market knowledge with varied work experience & varied age groups. This level of diversified contemporaries helps the educational process more practical because most of the training happens from peer groups in solving case studies.

Well, Studying in Indian B-Schools, you see the peer group of just about the identical age, almost the identical maturity level in understanding market dynamics and therefore the same level of work experience which doesn’t give greater room for learning from coevals as much as it could happen when studying abroad.

Bottom Line – If you are open to doing an MBA abroad, the return on investment is much higher than one in India. Today’s date studying abroad is no implausible task as several financial institutions are readily available in support of management aspirant funding for their studies. CAT aspirants must also consider taking the GMAT as it not only opens doors to Indian and Abroad schools giving wider options to do MBA from Premier schools but also saves one complete academic year from losing if expected results don’t come from CAT.