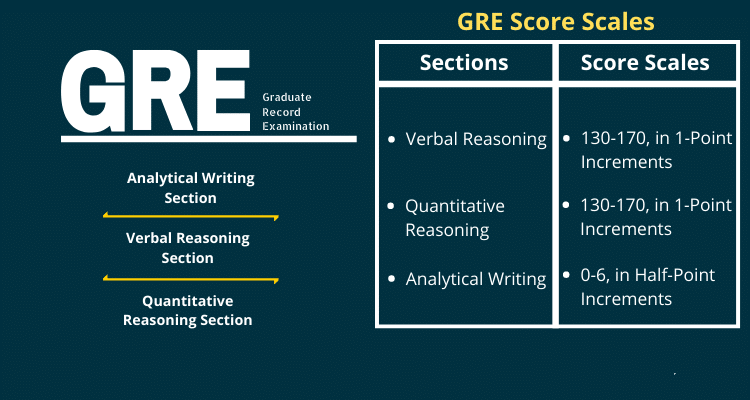 The Graduate Record Examination, or GRE, is a significant stage in the application process for graduate school or Business school. The GRE General Test is a standardised test developed and administered by the Educational Testing Service, also known as ETS, to assess your verbal, quantitative, critical thinking, and analytical writing abilities. The weightage given to GRE scores in the graduate school admissions process varies greatly between schools and departments within schools. The importance of a GRE score can range from being a mere admission formality to an important selection factor.

GRE® scores are used by business schools all around the world as part of the admissions process for specialised master’s, MBA, and other graduate business programmes. The GRE® General Test is, in fact, the most commonly regarded indicator of a student’s preparation for graduate-level work — and the only test that can help you get into graduate, business, and law school, increasing your chances of success. With the GRE General Test you can:

Who Takes The GRE Exam:

The GRE General Test is taken by applicants from all around the world who want to pursue a master’s, specialised master’s in Business, MBA, JD, or PhD degree.

Admissions or fellowship panels use your GRE scores to complement your undergraduate records, recommendation letters, and other requirements for graduate-level study. They provide schools with a common measure for comparison.

Why take the GRE Exam?

This test is an official gateway to get into the top universities in the US, Canada and UK. ETS is a non-profit organization that conducts the test throughout the year. Let us know a few important insights of the test.

The computer-based GRE General Test consists of six sections. The first section is always the analytical writing section involving separately timed issue and argument tasks. The next five sections consist of two verbal reasoning sections, two quantitative reasoning sections, and either an experimental or research section. These five sections may occur in any order. The experimental section does not count towards the final score but is not distinguished from the scored sections. the GRE General Test is a multistage test, where the examinee’s performance on earlier sections determines the difficulty of subsequent sections.

The GRE test format allows the examined person to freely move back and forth between questions within each section, and the testing software allows the user to “mark” questions within each section for later review if time remains. The entire testing procedure lasts about 3 hours 45 minutes. One-minute breaks are offered after each section and a 10-minute break after the third section. The paper-based GRE General Test also consists of six sections. The analytical writing is split up into two sections, one section for each issue and argument task. The next four sections consist of two verbal and two quantitative sections in varying order. There is no experimental section on the paper-based test. 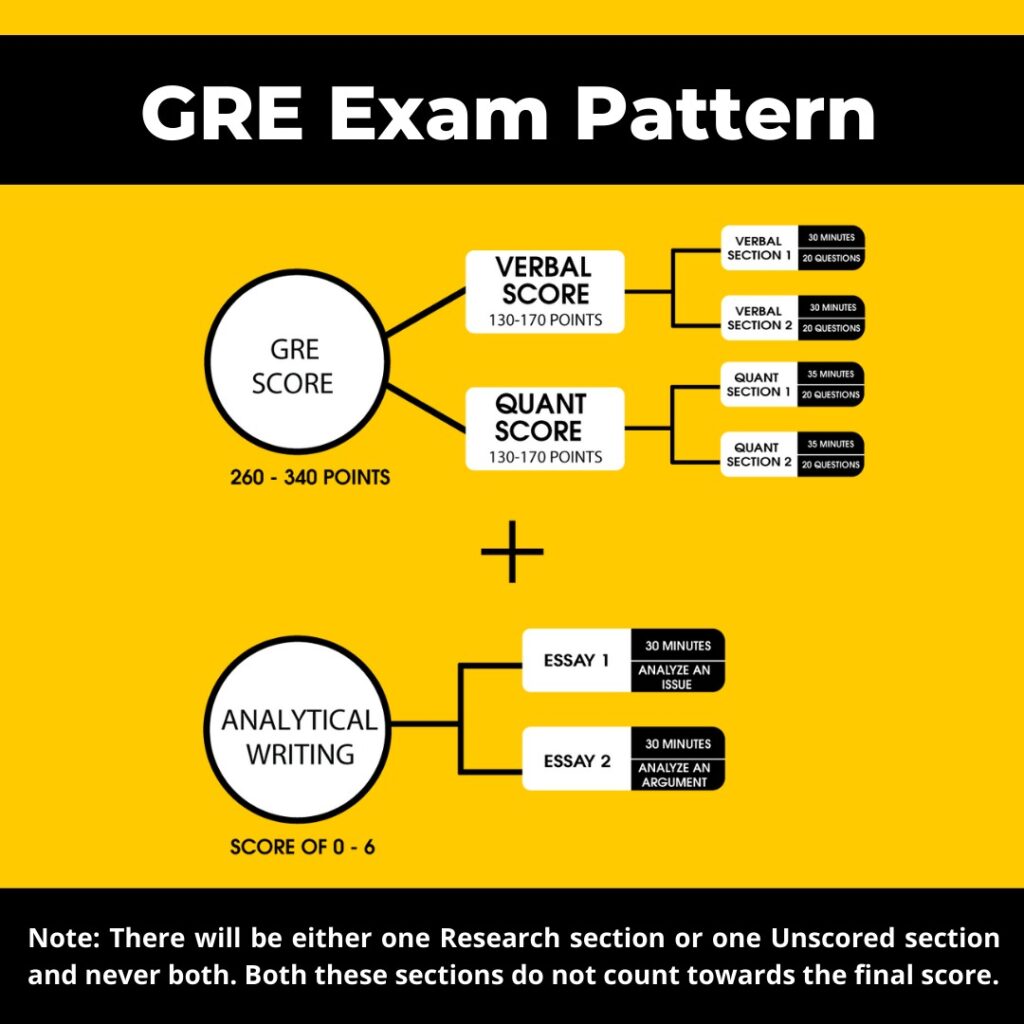 The computer-based verbal sections assess reading comprehension, critical reasoning, and vocabulary usage. The verbal test is scored on a scale of 130–170, in 1-point increments. Each verbal section consists of about 6 text completion, 4 sentence equivalence, and 10 critical reading questions.

The analytical writing section consists of two different essays, an “issue task” and an “argument task”. The writing section is graded on a scale of 0–6, in half-point increments. 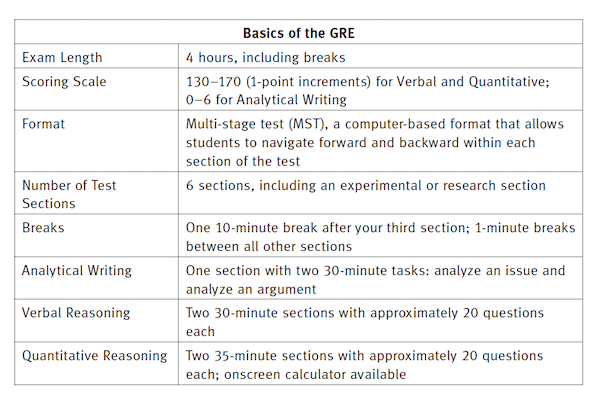 Are you looking for the GRE Live Online Coaching on Weekends, focused extensively on Basic Fundamentals and test-taking strategies, followed by Booster Classes and workshops covering  GRE Advanced Level questions with unlimited help sessions during and after the course? – Then you are at the Right Place! CONQUEST GMAT stands committed to what it says! Give a try signing up as a trial user to claim 20% of the course as a Demo (Read our complete course offering below).

Our Online Live classes brings the classroom learning experience to your home. Our Online Live GRE Coaching includes all the benefits of a physical GRE classroom Training without the need to physically travel to a learning center and without the constraints of having to live in a city where GRE classes are offered. The course is led by Master Trainers, who are well experienced in GRE Online Coaching, and are dedicated to identify and meet your needs for GRE preparation at the click of a mouse! During this course, students are provided access to our GRE study materials, practice tests, and other coursework.

We follow the C-A-T approach as our teaching pedagogy in every single class, where ‘C’ stands for Concept building (75minutes), ‘A’ stands for Application/Strategy building (75minutes), and ‘T’ stands for takeaway from the class (30minutes). Instructors follow this approach very religiously to ensure effective learning happens through interactive sessions with small-sized batches. No passive learning is entertained. All classes in the GRE online live course end with checkpoint quizzes to help you take stock of your learning.

CHALLENGES WITH GRE SELF STUDY

GRE is an Expensive & Time-Intensive Exam:

You want to crack the GRE on your first attempt! You need to know that this test is quite expensive and tricky. It is not bothered to know how good are you with school day Math and English but instead, it is testing how smart test-taker are you.

Studying With a Busy Full-Time Job is Painful:

You want to manage both your time and your energy well! For this you would need an expert guidance who could customize a study plan which fits your strengths and helps you bring balance in your work-life routine.

Our world today is undeniably digital and you find everything at your fingertips but the problem is, you never know where to begin from and end your GRE preparation when you see a Vast Free Resource. You need a study plan that keeps you focused along with a well-crafted course designed by GRE experts who has a holistic understanding of the GRE test.

GRE Advice Available online is Unreliable: You need strategies designed for you to succeed!

REASONS TO JOIN US FOR GRE PREP

Best in class Materials and Course crafted by Leading GRE Experts. Our teachers know the test meticulously as they are real-time test takers with the top percentiles

Uncompromised quality delivery of powerful techniques and strategies to score 330+ on GRE. Extensive Focus on Basics and Test Taking Strategies

Personalized My-Plan Sessions to customize your study plan. *Additional Booster Classes & Workshops at No Extra Cost. Unlimited Help-sessions during and after the course. We provide exhaustive and comprehensive GRE material that will never make you feel short of resource

Above all, we value your hard-earned money. Unlike others in the market, we offer you to Attend the Trial Classes First and then Enroll later, once Confident with the Course.

Try before you Buy: Signup Now as a Trial User

Attend 20% of course without paying a penny: Nobody in the test prep industry offers to sign up now and pay later. In-fact there are quite a few test prep companies that offer one demo class and expect to assess their entire course delivery which is close to impossible doing it with just one class(However, Offering one Demo Class is just like offering to watch a trailer’- and trailers are always catchy and appealing – else who will come to watch the ‘movie’?).

On the contrary, we offer 20% of the course as a demo to experience the class delivery and personal attention that we provide. We are so confident of our course that anybody who attends the session will be mesmerized by the class flow, class delivery, personalized attention, and the learning curve that our course offers

What skills does the GRE General Test measure?

The GRE General Test measures your verbal reasoning, quantitative reasoning, critical thinking and analytical writing skills — skills that have been developed over a long period of time and are not related to a specific field of study but are important for all.

How long is the GRE General Test?

The total testing time for the GRE General Test is around three hours and 45 minutes, plus short breaks. Get more details on the timing and tasks for each section.

What is a good score on the GRE?

How many times can I take the GRE?

How often can I retake the test? You can take the test once every 21 days, up to five times within any continuous rolling 12-month period (365 days). This applies even if you canceled your scores on a test taken previously.

What is the best time to give GRE?

Atleast two months before the application deadline. In addition to alleviating stress, this will allow you to re-take the test if you’re unhappy with your score

Taking the GRE multiple times will not harm your chances of admission. ETS (Educational Testing Service—the makers of the GRE) introduced a new feature for test-takers applying to grad school called ScoreSelect

What is Score Select option?

ScoreSelect allows you to decide which scores a school will see—and you don’t have to decide the same day you take the test. In fact, you can wait until after you’ve received your scores to decide if you want to send them. … ScoreSelect Most Recent option — Send the scores from the test you just took.

On 10th January 2018, chemical engineering student Arjun Shah cracked the GRE with a perfect score of 340. … At 20, he’s managed to clinch the perfect 340 in the Graduate Record Examination (GRE)

What is the price of the test?

How is the GRE General Test administered?

The GRE General Test is a computer-delivered test offered year-round at home and at test centers around the world.